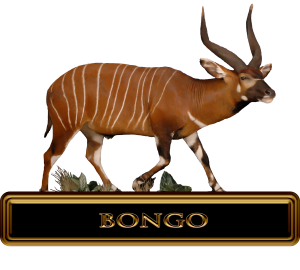 Legacy Outdoors offers the best Bongo Hunts in Africa!  We work with the top outfitters in each area the Bongo can be hunted.

The Bongo is known for its most impressive red-brown coat, prominent white side stripes and the black and white face markings. It is the largest of all the African forest antelopes, males can reach a live weight of 550 pounds. The bongo is a spiral horned antelope. A very interesting fact is that a Bongo is the only animal within the family of “tragelphids” where both the male and female animals carry horns.

There are two sub species of Bongo you can hunt in Africa, namely the western or lowland bongo which occurs in the forests of Cameroon, Angola, Benin, Burkina Faso and the Democratic Republic of the Congo. There have been reports of Bongo being seen in the Ivory Coast, Ghana and Sierra Leone, but population numbers in these areas have not been well studied. This is the only Sub specie of bongo which can be legally hunted in Africa.

The second Bongo sub-specie is The Eastern or Mountain Bongo which occurs only in the mountainous areas of central Kenya. This sub specie is classified to be critically endangered so cannot be hunted. The hunting of Bongo only really takes place in four countries which are Cameroon (80percent of hunting), The republic of Congo, Congo, and The Central African Republic.

The western Bongo is found in dense tropical forests up to an altitude of 12000 feet.These animals feed on low level green vegetation, fruits, shrubs, bark and vines, and will readily enjoy a salt or mineral lick in the evenings. The Bongos’ horns grow in a lyre shape very similar to that of a Nyala and Bushbuck. Both sexes carry heavy spiralled horns and this makes hunting Bongo so much more challenging. The males horns grow thicker and longer than that of the females, but the utmost care should be taken before taking the shot that it is indeed a male. Being a mostly nocturnal animal the bongo is seldom seen out in the open during daylight. Bongo scare very easily and when frightened they run a considerable distance and then stop and wait to see if they are still in danger.

When to hunt Bongo!

The areas that these animals occur are extremely humid and not very pleasant, so bongo are typically hunted during April through to July as this is when the weather is manageable. The vegetation where the Bongo occur includes a wide range of vines, thorns, plants and tress which makes it necessary to cover up any exposed area of your body. Not only the vegetation but insects, spiders and the famous forest ant also love getting a bite of soft, moisturized human skin.

What to expect when hunting African Bongo!

A normal hunting day starts early morning before sunrise looking for a single male Bongo track. Dogs are used to bay the animal and then this allows time for the hunter to catch up and take the shot. For this reason, the tracks of a group of Bongo are seldom followed as the dogs may bay up a female or even worse a calf which will for obvious reasons not be shot. There is a common miss understanding in the hunting methods used to hunt bongo – the use of dogs. The dogs do not track the bongo, the pygmy trackers do. The dogs are only used once the animal is seen. Once the bongo is spotted the dogs are released in hope that one or two will catch up and bay the animal. This allows time for the PH and Hunter to determine if it is indeed a male and a good trophy to take. The bay does not last for long, and should the animal see the hunters it will flee and break the bay, disappearing into the forest. The dogs cause no harm to the animal whatsoever due to their sheer size.

If you are looking for a great Bongo hunt in Africa, give us a call or fill out the form below and let us help you find the perfect bongo hunt for you.

Have questions about our Bongo hunting trips?

Let us find you the perfect hunting trip, our experience costs you nothing.